The artist Johanna Friedman needed to rest up emotionally after a destructive relationship and considering taking a break in her artistic creation to watch TV for a few months. A year later, she is exhibiting the needlework she created while slavishly following docu-soaps and series such as Gossip Girl. Lisa Carlsson met Johanna in her current home in San Francisco to talk about love, symbols and the tactile in textiles.

The coffee maker has broken and Johanna Friedman is packing to travel to Sweden for a month. She will be renting out her room in the house on Florida Street, which she shares together with another artist, and must put her stuff away. It is slightly chaotic, but nothing seems to faze her. Thursday afternoon is calm and comfortable in the Mission, in the backyard grow lemon trees and in the neighbour’s garden hens peck seeds in the sun. We are sitting in the studio where the walls are lined with her big fabrics and she talks about the exhibition that awaits in Gallery 21 in Malmö.

Johanna – “The exhibition is called Watching TV/Channeling and consists of needlework and fabrics that I did while watching TV. It was not actually going to be an exhibition. It all started when I came home to Sweden after having had my examination exhibition here in San Francisco. I think it is hard for anyone who undergoes artistic training and then go out onto the job market which is so uncertain. I believe that many people become paralyzed and do not know what to do. But in addition to that, I had a really destructive relationship and when I came home, I was just so awfully tired. I thought I was depressed but was diagnosed with adrenal fatigue. The body stops producing cortisol if you have been exposed to stress for a long time and this is what happened to me. I wasn’t able to do anything, couldn’t get up in the morning, nothing worked. And the only thing I could do to get better was to rest and eat vast amounts of vitamins and minerals. So I sat in an apartment in Malmö and watched TV and I could only watch programmes that didn’t require me to be emotionally invested. My psychiatrist put me on an emotional fast and I was not allowed to become involved with any drama. So I watched docu-soaps and knitted. There is something very therapeutic in doing needlework. I wasn’t allowed to attach any prestige to what I did, so it’s a bit ironic that it resulted in an entire exhibition. 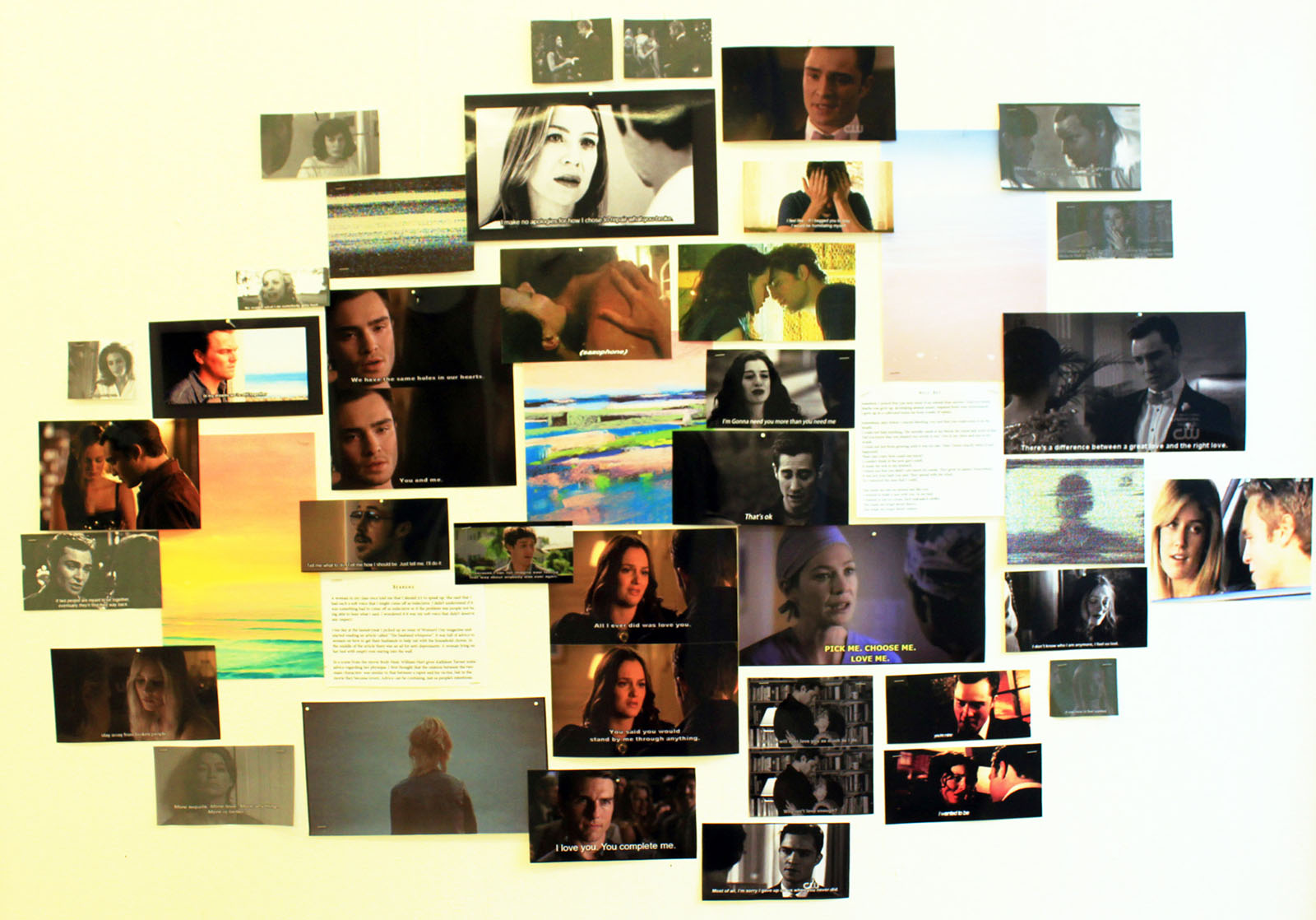 How was the needlework influenced by what you were watching?
“It wasn’t at the beginning. But after a while, I started to incorporate what I was watching. I have worked a lot with sunset colours. And I interweaved still images. My computer is full of screen shots of different scenes that for some reason stuck with me. Sometimes it is clearer what I have woven into the work. Concrete representations of what I’ve been watching. But with some of them, I’ve thought that the surfaces of the fabrics are like a TV screen. Film is vertical, horizontal and diagonal lines, just like fabric. You can look through and see what it represents and you can get fixated on the surface. Textiles work the same way. I watched a lot of Gossip Girl and was obsessed with Blair and Chuck.

Oh! I remember when she had sex for the first time, with him in a limousine. I was thinking about that for a long time afterwards.

“Yes! Then their relationship continues throughout the entire series. It is quite sick that their relationship, which is a mentally abusive relationship, is portrayed as something that is ok, even romantic. And I also thought that it said so much about me and my ex. That certain things that were said could explain our relationship. “There’s a difference between a great love and the right love” e.g.

It is quite sick that their relationship, which is a mentally abusive relationship, is portrayed as something that is ok, even romantic.

So do you think you found what you needed in fiction?
“Absolutely. In retrospect, I can look back at myself and think “my goodness, what was I doing” when I was talking to my friends and referred to Gossip Girl all the time. However, TV shows and films establish very strong norms for how we think love should be like. And the exhibition will be a little tongue in cheek. At the same time, it is not ironic, it is serious. I want it to be really cheesy, I want to accentuate the romance.

There could be something feminist in selecting this type of expression. Lifting feminine coded “ugly culture”.

“Yes, and it’s the same with textiles, too. I have been in that pigeonhole for so long. There are a lot of people in the art world who look at textiles and dismiss it because it is so charged with a feminine history. As a woman if you are interested in textiles, it is seen almost like a natural thing. While if a man does this, it is regarded as a conscious choice, made because of what textiles can convey. As if this could not be the case for a woman.

How did it come about that you chose to work with textiles?
“There are probably different explanations. One explanation is that I’ve always been a bit on the border between design and art. I am interested in the object. In the art world, there is a strong desire to place things. At the University College of Arts, Crafts and Design, it was perhaps more permissive but at CCA I always had to say whether I was working with art or design, nothing could be in between. I work an awful lot with aesthetics. I haven’t just worked with textiles, but always come back to it. There is something very enticing there. Something soft that you want to touch. It is very tactile and it is easy to manipulate a material to look like something that is not. There are so many options with textiles.

Where do you find inspiration in addition to gossip girl? Is there anything that is constant?
“My parents are social anthropologists and structuralists and that has influenced my way of looking at the world as the system. To see a phenomenon and place it into a category, then you see if anything else fits, if it follows the same pattern. Take watching TV, for example. Initially, it was just going be a way of relaxing but later, I started thinking about why I do what I do? Why am I living through these characters? How have films affected the language we use when we talk about love and what do we expect from loving relationships? This mind set is present all the time and it is important.

Then I watch people a lot. I’m inspired by society and things that are bizarre.

Like what?
“Anything can look really weird when taken out of its context. If you look at something for a long time, you can easily come to the conclusion that people are mentally ill. It is like repeating a word again and again and again until it eventually loses its meaning. But it might also have something to do with the fact that I’ve suffered with overwhelming feelings of unreality since I was little. I made a film about this for my final exhibition at CCA where I worked on what happens in the brain when these feelings arise and link it to when it happened to me. A large part of my art is about the displacement that occurs in repeats. Language is coded but when repeated, you stop listening to the codes and when only the form of the word remains, the word loses its significance. But I also believe that you can link the repetitive with processing the trauma. There is something cathartic in repetition. When it stops meaning something. You transcend. It’s like in yoga and meditative states.

There is something cathartic in repetition. When it stops meaning something. You transcend. It’s like in yoga and meditative states.

“I am also interested in how the eye wanders over images and what things symbolise. Take a flag, for example. The first thing you think about when you see the US flag is “Ah, what fine stripes and stars” it’s like a portal to something different and what I want to do is to stop and create more friction where it happens.

Do you think everyone has the same access to all symbols, for example, to charge them or make use of them?
I think that is the case philosophically but not politically. We’re not there yet. You have to remember where you exist and in what context you exist. This is what is so problematic about the fact that white men have been the norm for so long that they think that their bodies do not symbolise anything. That they are almost like a white cloth that can do anything or take on any form. This is why it is good that these discussions have started where it emerges that being a white man and doing certain things is charged. They have not been raised to view themselves like that. But as a woman, you regard yourself from the outside all the time, thinking all the time about how your actions will be perceived in a way that I think everyone who isn’t the norm is forced to do. Seeing both the world from the outside and then yourself all the time.

Do you always start from yourself in your art?
“I’ve started to dare to do it more and more. I had a tutor who encouraged me to make representations of my own relationship with the things I work with. Everything goes through me like a filter and I was encouraged to be more personal. In one way I think it’s a shame that there is such a personal focus on female artists. Sometimes it feels like it’s more important to portray the artist on the outside instead of letting the art speak for itself. At the same time, I like it when the art is based on a personal matter. I prefer listening to a personal anecdote rather than someone giving a theoretical presentation. Maybe this comes from my mother. She has always told very personal stories when she writes books, there is a lot of substance there. It is stories that say so much more. That is what I’m trying to strive for.

Note: Together with Roxy Farhart and Hanna Stenman, Johanna Friedman has created the performance piece Minimal Kompetens [Minimum Competence], which is now showing at Malmö Museum as part of the feminist joint exhibition “En egen röst” [One own voice].

Lisa Carlsson is head of our fashion department and contributes regurarly with portraits of amazing women. She is an outstanding writer and critic. Her debut novel will be published at Atlas Förlag in spring of 2017.